Health in Andorra in 2021 explained in detail

Certainly health care is one of the key points that make Andorra an extraordinary country. This competent and efficient system has earned Andorra to be considered as the best healthcare in the world or of the best in the world in different and varied rankings.

For example, the Lancet medicine magazine published in 2017 a report prepared by the Institute of Evaluation and Metrics at the University of Washington (USA). This report collected data from 195 countries between 1990 and 2015, conducting an evaluation every five years. . The health system of the Principality led the world ranking in all these evaluations, from the 85 points obtained in 1990 to the 95 of 2015, in which Iceland obtained 94 points, Switzerland (92 points),  Spain obtained 90 points and France, which is fifteenth, with 88 points. But how does it work?

Table of Contents Hide index
1 Andorran social security
2 How many does health care cost in Andorra?
3 A competitive system
4 How is health coverage obtained in Andorra?
4.1 Private insurance. Necessary?
5 Distribution of the health system in Andorra
6 Frequently asked questions for tourists and foreigners
6.1 Does the European health card work in Andorra?
6.2 Frequent accidents
6.3 Agreement between Spain and Andorra
7 Agreement between France and Andorra
8 What are the main causes of mortality in Andorra?
9 Referral Doctor
10 Contact and more information

Health, sanitation and social security in Andorra are based on a highly efficient simplified and centralized system. In this case, a single body regulates all social devices and medical coverage in the country: the CASS, the Andorran Social Security Fund (China Andorran de Seguretat Social).

As the former Minister of Health Carles Álvarez-Marfany (current Andorran Ambassador to the Vatican) summarized very well, the effectiveness of healthcare in Andorra is based on three fundamental principles:

A quite remarkable advantage is that it has a greater subsidy for dental treatments than neighboring countries.

Also contributing to the very good functioning of the system is a high per capita income, the low overcrowding of the country, and the large participation of workers who contribute to social security. In other words, the good shape of the Andorran economy.

On the contrary, due to the small number of inhabitants of Andorra, there are specialties in health to which there is no access in the country itself. For this reason, the CASS has established agreements with the social security services of Spain and France for which the specialties not available in Andorra can be carried out there (more on this later).

How many does health care cost in Andorra?

Starting with the principle of co-responsibility, in Andorra, health works by co-payment. Health coverage covers a part of the total cost, not all costs. The medical expenses covered by CASS are basically divided into three according to the medical service and the amount subsidized.

However, cASS finances 100% of the treatment to those people who demonstrate that they cannot cope with the debt, such as people without resources or in a situation of social exclusion, thus linking health with the principle of solidarity mentioned above, since no one is off the hook because of their bad economic situation.

It should be noted that first of all the user or patient is responsible for all costs. When he is treated by a doctor, he receives a sealed form and CASS receipts. The recovery of the percentage of the corresponding expenses is carried out through a local CASS office with all the documentation. Although currently there is also a computer system that does this process automatically and reimburse the amount by bank transfer if everything is correct after a few days.

A solution for those who do not want to carry with the punctual payments that the co payment supposes is hire a complementary insurance of expenses, which covers precisely the percentage of costs that CASS does not subsidize.

The third fundamental principle of health in Andorra is freedom. Freedom so much to treat (freedom for CHOOSING to doctor, of demand) as to exercise (freedom for BEING a doctor, of offer).

And it is that this health system can adhere as agreed all professionals that offer services subsidized by CASS by a simple process and with certain conditions, resulting in health in a a kind of check system with a co-payment in which the State is obliged to finance health services, but it is the user who chooses who, where and how to obtain them.

Thus, a patient can go to the Nora Senora de Meritxell Hospital and will be treated with all the guarantees and conditions of Andorran health. But you can also do it in one of the many private clinics agreed by the CASS for the service you demand and the CASS applies the same standards.

In fact, private doctors are legally authorized to perform surgical and diagnostic operations in a hospital if the client demands it and also with the novelty of the Referential Physician Andorra seeks to avoid saturation of the system and public hospitals by coordinating and organizing patients efficiently in private clinics, something unthinkable in neighboring systems.

How is health coverage obtained in Andorra?

To obtain health coverage in Andorra as a resident you can join the Andorran Social Security Fund. More than 90% of the countries inhabitants are covered by this social security, according to statistical data. However, there are non-covered passive residents who have their own private insurance.

Joining the Social Security Fund (CASS) is mandatory for all salaried people they exercise a professional activity and for the vast majority of residents.

There are two ways to be covered by social security, with effective employment either on their own account or on behalf of others (with a local or foreign company) or being unemployed. The unemployed can choose to join the CASS by paying a contribution of 200 to 400 euros per month.

Although Andorran social security is not an independent health insurance, With CASS coverage, your trips to neighboring countries are additionally covered like France, Portugal and Spain. However, you must request a travel flyer from CASS before the travel and then send medical bills to CASS for reimbursement.

Recommended but not necessary. Private health insurance makes it possible to expand the already complete Andorran social insurance (clinics and unconventional services). In addition, there are supplementary insurance that covers the remaining percentage when applying the corresponding CASS grant, to avoid one-off payments entirely. It is estimated that around 25% of the population have private health insurance for its benefits.

Distribution of the health system in Andorra

The andorra health network It is large if you take into account the size of the country. There is a main hospital in the capital with 200 beds (Hospital Nostra Senyora de Meritxell).

Throughout the Principality there are 10 health centers that provide very high levels of care. They are open during the week, but rarely on the weekend. The centers provide preventive care, immunizations, first aid, prenatal and infant care, family planning, and general counseling.

You can get urgent care by visiting a health center or having a home visit without an appointment. Elderly patients can also be cared for in a 50 bed private geriatric center (Center Geriàtric Sant Vicenç d'Enclar).

Andorra has one of the world's highest per capita pharmacy rates. In the Principality there are more than 50 pharmacies that provide prescription and non-prescription drugs and health supplements.

As we have only explained the health for those discharged from the system, we will now answer some questions frequently asked by tourists not registered in the CASS.

Does the European health card work in Andorra?

No it doesn't work. Although Andorra has some agreements with the European Union and due to its proximity to Spain and France, there is a tendency to believe that the European health card can be used, however, this is not the case. It is important to inform yourself well before traveling.

Being Andorra a country that is not part of the European Union the European Health Card is not valid in the Principality.

Most accidents are for winter sportsor during the high season in Andorra. Falls and injuries in the mountains skiing or practicing another similar sport are the most numerous, especially in adverse weather conditions. For this reason, travelers are advised to keep up to date with local alerts of the meteorological and avalanche situation. Avalanches generally occur during the middle of winter, early summer. Landslides can also occur after long periods of heavy rain. Crime-related injuries are almost nil.

Agreement between Spain and Andorra

There is health agreement between Spain and Andorra. You have to take several steps and be clear about what the agreement covers and what it does not. Before traveling to Andorra you have to request the travel flyer to Andorra at Social Security, also known as E / AND-11. During the trip you must carry this form and present it together with your ID if you need to use the health system.

However, this form does not free you from paying in case you have to go to the doctor. With an urgency the affected person must pay between 10% and 25% of medical assistance. Bear in mind that you initially pay the entire cost and upon return to Spain you must request a refund of the percentage that you did not have to pay.

In case it is not an emergency, you will have to pay everything of the medical cost. If the necessary medical assistance is not enough, it will not be very expensive, but the health abroad can be very expensive the more serious we suffer.

Agreement between France and Andorra

On December 12, 2000, the French Republic and the Principality of Andorra prepared a social security agreement. It aims to cover the greatest number of people in the health and social protection sector. This convention specifies that individuals are subject to the social security scheme of the country in which they are carrying out an activity:

The branches submitted to the Franco-Andorran agreement on health and social protection are the following:

What are the main causes of mortality in Andorra?

For residents, tumors, cardiovascular and respiratory diseases cause the greatest number of deaths. Infant mortality is very low. Andorra death rate in 2018 was 4.4% with 335 deaths.

One of the novelties of Health in Andorra is that of Referring Physician, to improve access, efficiency and coordination of medical care.

The user currently registered in the CASS you must choose a GP or pediatrician as a Referring Physician. This offers a more personalized but general health care, and monitors the user's health status over time. It is the first node, the first diagnosis, which requests visits to specialists and guides the health system and coordinates with the different health professionals who treat the patient. In addition, in the consultations with the Referring Physician it is not necessary to pay the full cost. Only the part that corresponds to the user is paid directly, that is, the 25% of the established rate.

If you need more information, want to reside in Andorra or move your business, do not hesitate to contact us here. For more advantages and qualities about Andorra, instead, press here. 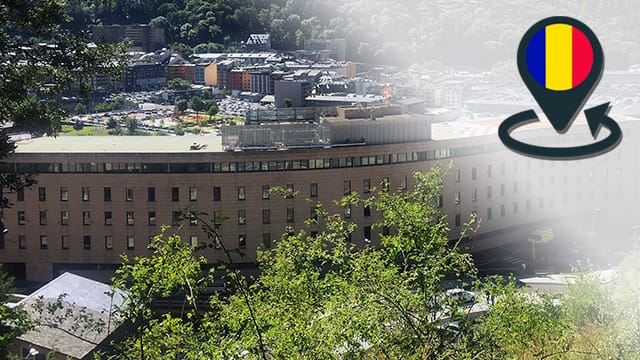