El Rubius moves to Andorra: yet another youtuber

After more than ten years residing and paying taxes in Madrid, Spain, finally the Rubius (named Rubén Doblas) has decided move his residence to Andorra with his girlfriend Irina Isasia, following the path that many other youtubers have taken. Behind the debate has reopened and criticism has been stoked about the influencers and celebrities who decide, when they become relevant, to move to a country with less taxes and more attractive taxation.

For us the debate is more than settled. On one side anyone is free to make his life as he wantsOn the other hand, if these types of people are willing to live in Andorra despite being hundreds or thousands of kilometers from their family, friends and social circles, city and origin, that is nothing more than proof of how terrible Spain is as a jurisdiction, how incompetent he is at attracting capital and the mistreatment to which he subjects his own entrepreneurs and successful people.

As the famous phrase goes, if tax havens exist, it is because tax hells exist. And, in any case, Andorra is no longer so, well it stopped being so almost ten years ago. Although many may regret it, in Andorra there are public healthcare Y public education first class and much more competitive and free than in Spain, excellent safety and roads in better condition than those in Spain; all in all, better utilities at a fraction of your taxes. The same is that it's about spending better, not spending more.

In any case, although many people do not believe it, the truth is that There are many advantages of Andorra for youtubers, streamers and, in general, content creators. Obviously low taxation is one of them, but it is not the only one. The truth is that the profession of content creator, whatever its modality, turns out to be ideal to do it in Andorra.

As we mentioned a couple of months ago, Andorra is an ideal place for digital entrepreneurs, and creating digital content falls within this category. The power carry out your activity from anywhere without depending on physical location and the fact of working with intangible products makes them able move your business in a very simple, fast and safe way, and allows them to spend more than 183 days in the country, something required for tax residence in it.

In addition, despite being a mountainous and rugged region, Andorra has a latest generation internet covering the entire territory at the mobile network level and all households with respect to fiber optics, with which they can remain connected even if they live in a small town in the middle of the Pyrenees without any problem.

This is even more Important for Twitch streamers, online video game players, and esports professionals, etc. Although it is highly recommended to have a good internet connection to upload delayed videos and podcasts to YouTube, Ivoox or others, to be able to broadcast video or be able to play streaming is a crucial requirement. These are activities in which a moment of poor connection, lag or temporary drops can lead to an intolerable drop in quality.

On the other hand, Rubius himself has indicated in a stream of Rust, Egoland on Twitch that "he is moving to Andorra because all his friends are there", also admitting that the low taxes are quite a rewarding extra. Although it sounds like a bad excuse, it couldn't be more accurate: In the Principality there is a large community of content creators, which allows great networking opportunities between entrepreneurs in the sector, as well as collaborations, events and "feedback" between them.

We cannot forget the large number of profiles of this style who have decided to settle in Andorra creating a company and doing your business from here. We are talking about high-level people like Staxx, WillyRex and Vegeta777, the youtubers of the famous 'squad' or 'piscineros' or Fortnite references like Lolito Fernández and TheGrefg, who by the way a week ago broke the record for simultaneous viewers in a live show on his Twitch channel with no less than 2.5 million, when the previous record was Ninja's 635,000. Nothing bad.

There are also many other lower level, like Thetoretegg, 8cho or Fargan, with whom Rubius has recently shared quite a few series of gameplays such as Karmaland and many more. Your friend and companion of adventure and fame since its inception Alexby has also announced that he is in Andorra, and I suppose that both of them will have been a fairly joint decision.

Finally, the enormous physical and legal security in the Principality. While in Spain private property is pursued, giving the right to squatters over owners, there is hardly any crime in Andorra despite having a small police force and no army. The fact that it only has two points of entry and exit from the country together with other factors makes control is easy to exercise with few resources, optimally. It is also a country with a huge tradition of pacifism and war neutrality.

Without a doubt, the country has much to improve and advance, especially on issues such as paperwork and bureaucracy, improving legislation and making it more flexible, digitizing its institutions, entities and businesses, international recognition or attracting young people and students. However, it is a fact that it is a wonderful country and it is a very good option to consider. by enterprising people who seek to be left alone.

For us it is great news that he has finally decided to put an end to the plunder to which he has been subjected for more than ten years of his professional career and has left behind his fears about social criticism and "what will they say". We further believe that, as we did in their day, they have done the right thing fleeing from a statist and bankrupt country that plunders its taxpayers mercilessly and wastes both its resources and others it does not have and borrows.

At the end of the day, that is why we have started the Andorra Insiders project. Help people and especially entrepreneurs to take this path and settle in a country much better managed both in terms of freedom and security it is an honor for us. 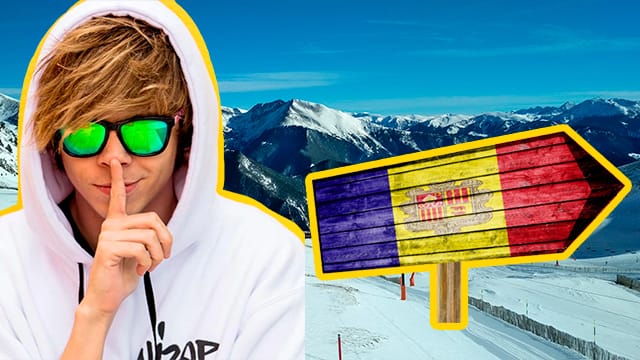